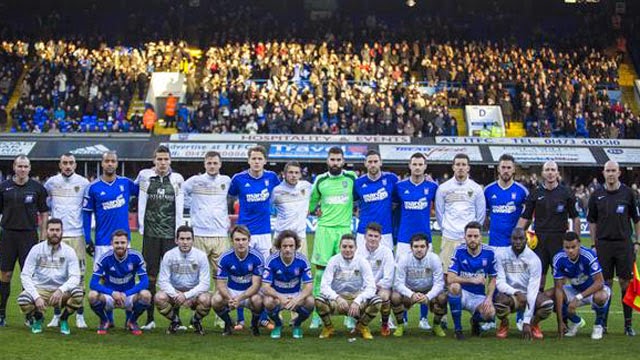 A combination of a bright, crisp winter's morning and memories of last week's defeat of table toppers, Derby, filled the car with extra positivity as the Happy Chocker, Quiet One and yours truly headed south for our clash with Mick McCarthy's high flying Tractor Boys. Despite Leeds' awful record away from LS11 this season the Derby win had given everybody at the club a large dose of optimism for our fortunes on the pitch to balance against the disturbing events off the pitch with the Football League seemingly hell bent on getting their man Cellino come hell or high water. Neither the Sheriff or his followers were going to come quietly though as illustrated in the Riverside Inn at Ipswich as the boisterous pre match songbook was blasted out by the passionate, massed away fans.

The injured Bellusci was replaced by Pearce but interestingly Warnock kept the captain's armband in an otherwise unchanged team. After the mixed team photo in remembrance of Xmas football match between the British and German troops during the 1st World war the game was underway. Leeds picked up just where they had left off against Derby with crisp decisive passing troubling the home side although it was the dangerous Murphy who had the first shot of the match which deflected  harmlessly into Silvestri arms. Soon Leeds were on the attack again though as they pushed forward looking for an early goal. The evergreen Warnock supported his young midfielders, Cook and Mowatt, and found space beyond the Ipswich full back before picking out Antenucci on the penalty spot who finished coolly to give Leeds the lead and send the 2,000 visiting fans into raptures. 4 minutes gone 1.0 Leeds.

Could we be on our way to beating another high flying championship side? I dared to dream for one fateful minute. Of course I should have known better after years of watching Leeds on their travels I should recognise the phrase "flatter to deceive"

Ipswich stung by the goal flew back at Leeds with gusto. Luke Chambers swung in a deep cross for the tiny Stephen Hunt to rise high at the back post and head wide. Leeds failed to heed the warning and two minutes later it was the impressive Daryl Murphy timing his run to perfection to connect with another Chambers cross and leave Silvestri with no chance as his bullet header nestled in the back of the net. Capt Warnock berated ex Capt Pearce for his inept challenge on Ipswich's top scorer. Poor, poor defending. 1.1.

Leeds responded immediately. First Antenucci was caught offside against the tightly drilled home defence after a lovely ball from Warnock and then Bianchi finished off good work from Leeds with a volley that was blocked before Antenucci slipped his marker again but shot high, wide and handsome. Leeds were giving as good as they got in a very open game but both Murphy and McGoldrick were digging out chances for the home side as the game headed for the half hour mark.

The referee, Mike Dean, is not the most popular ref amongst Leeds fans and he added to that reputation as he gave a soft penalty after Warnock had jumped to clear a ball on the edge of the box before bundling Anderson over. Very harsh. Needless to say McGoldrick dispatched the penalty with ease to give the Tractor Boys a 2.1 lead and a head of steam that Leeds now struggled to contain. Chances began to flow to the home side as Leeds' early confidence on the ball disappeared to be replaced by hesitancy and numerous errors especially in their own half. Byram in particular was having a match to forget. Murphy killed the game right on half time with his second and Ipswich's third from what looked like an offside position with the Leeds defence in absolute meltdown. 3.1 Ipswich at Half time. Suddenly the long trek to Ipswich was looking like yet another fruitless away day in the search of Leeds United perfection.

"Still if we can just get a goal back early in the 2nd half" I forlornly hoped.................Instead Ipswich increased their lead almost immediately as a Tommy Smith header was helped into the net by Berra. 4.1 Ipswich. "This is going to end up 6 or 7" the not so Happy Chocker piped up whilst the fans in front of me were already heading back to the sanctuary of the Riverside Bar to drown their sorrows. We might aswell have followed them as Ipswich never relinquished their stranglehold on the game as they passed through the now dishevelled and well beaten Leeds team. Sharp, Austin replaced Adryan and Doukara but to little effect. Austin summed up the visitors afternoon as he strode free from his marker and hit a shot from the edge of the box that ballooned away to the corner flag. Embarrassing to say the least. We were already in the car heading home when the final whistle went signalling a 4.1 victory to the Tractor boys.

The long trip home was a quiet one as we tried to understand how we could go from beating a very good Derby side one week to losing so tamely to a good Ipswich side the next? Defensively we looked very vulnerable. Was it because Pearce was back in the back four or did the midfield allow their counterparts just too much space to run at the defence? 12 hours after setting off I turned the key in my door and let myself in. Another hugely disappointing day in the life of this travelling Leeds fan. Still there's always Fulham at home to look forward to next week. We should beat them shouldn't we? I'm already nervous.

MOT.
Posted by Andrew Butterwick at 22:27