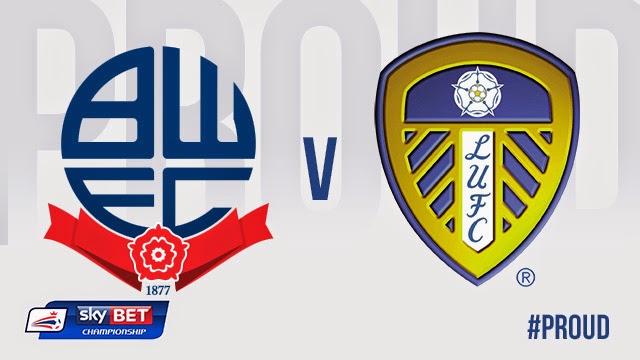 The wild and windy weather made for an interesting trip across the hill into Lancashire for our latest Championship clash against Bolton Wanderers. The Happy Chocker and Quiet One were on board as we debated the prospects of bringing anything home from our trip to the Trotters. After last week's promising 2nd half showing against Sunderland there was a spark of hope that we might just upset Neil Lennon's in form Bolton side even though the combined age of their strike force is 72 years. Redfearn decided to stick with the 4-2-3-1 formation that worked well on Wearside and also surprised a number of the battle hardened away fans with his team selection. Morison came in to lead the line with Sloth keeping his place at the expense of Mowatt. Belusci, Byram and Cook all returned to the starting line up in an intriguing formation that had Byram playing wide midfield in front of Berardi at full back. Young Charlie Taylor kept his left back spot.

The wind swirled around the newly named Macron Stadium whilst dark threatening clouds hung overhead as the game got under way. These were not ideal conditions for Football. Leeds exploded into the game with little regard for the testing conditions as they attacked the Trotters from the kick off and for once got an instant reward for their endeavours. Leeds harried the home team out of possession before Lewis Cook threaded a slide rule ball through for Byram who skillfully took the ball around ex Leeds goalie Lonergan only to be brought down by the Bolton keeper. PENALTY! Surely he'll walk for that? The referee thought not and didn't even give him a yellow card for blatantly bringing the young Leeds star down and preventing a goal. Bizarre.

Rudy Austin stepped up to take the penalty. A few nervous fans around me predicted it would end up in row Z but thankfully the Jamaican made no mistake as he sent the giant Lonergan the wrong way. 1.0 Leeds and the travelling hordes from Leeds were in unexpected heaven. Just the 87 minutes to hang on then! Bolton were clearly rattled as Leeds tried to take the game by the scruff of the neck. Murphy and Austin were snapping at the Trotters heals in midfield whilst Byram was popping up all over in attack as the mighty whites looked for a second. On ten minutes the hard working Morison drew a superb save save from Lonergan with a thumping header that had the away fans so nearly celebrating another away goal. This was much, much better from Leeds.

Liam Trotter was lucky to escape with just a foul when he scythed Austin down as the Leeds dynamo sped away from him but managed to prise a yellow card out of the ref's pocket just minutes later when he clattered Taylor in another reckless tackle. In another game Bolton would have already been down to 9 men. Bolton awoke from their slumbers and forced a corner after a good tackle from Taylor. Matt Mills rose to meet the corner and headed inches wide from the edge of the 6 yard box. A worrying warning shot across the Leeds bow and with Bolton's Aaron Lennon lookalike, Feeney, starting to probe the flanks Bolton began to look a threat. Their front two pairing of Gudjohnsen and Heskey might be getting on in years but they still posed a threat to the young Leeds centre backs especially the Icelandic ex Chelsea man.

Leeds survived a couple of dangerous free kicks on the edge of the box but unlike in recent weeks this Leeds side was showing true grit as they battled both the home team and the awful conditions as sleet began to fall from the darkened sky. Leeds were showing lots of endeavour on the break as Murphy and Cook had shots blocked as the game headed for half time. Bellusci escaped with a yellow card after clattering Heskey near the half way line just before the break. The Leeds team trooped off to an ovation from the 4,000 travelling fans as I went in search of a Bovril to try get some feeling back into my toes. It was bloody cold.

In the first half Leeds had shown a real spirit and fight that had been clearly missing at Derby so was it too much to ask for another half like the first and an unexpected 3 points as the sleet continued to fall from the sky?  Well not quite. 2 minutes into the 2nd half and Bolton were level. A deep cross into the Leeds box found Silvestri wanting as he flapped at the ball and shovelled the ball straight to Pratley on the edge of the box who was tripped by Murphy. Penalty to Bolton. Gudjohnsen coolly dispatched the spot kick to bring the scores level. 1.1 and suddenly the home fans woke up. Cue the Jimmy Savile song?

Bolton were looking the more likely team now but Leeds were dangerous on the break as both Cook and Byram took advantage of quick breaks from the hard working away team to test Lonergan in the Bolton goal. Bolton were enjoying the majority of the possession but the Leeds defence was holding firm with Bellusci and Cooper leading from the front with some brilliant tackles and blocks. Byram took a heavy blow to the head that delayed the game for 5 minutes. On the restart Leeds continued to look for a break away goal. Both Berardi and Sloth nearly converted difficult half chances as the numbing cold began to threaten frost bite to my toes. Cooper made a stunning block from a Gudjohnsen shot that certainly saved a goal as the game entered the final ten minutes still level at one apiece. Sam Byram was excelling in his new role on the right of the advanced three in midfield and nearly crowned an excellent display with the winner after good interplay with Cook saw his shot desperately saved by Lonergan. I wasn't the only Leeds fan who thought it had gone in.

The game ended 1.1 with both teams out on their feet after a good old fashioned ding dong game in awful conditions. Some away fans were questioning why Redfearn hadn't made more substitutions but other than bringing Mowatt on for a tiring Sloth who else would you have taken off? They were all playing well. Man of the match for me was Byram with superb contributions from both Murphy and Austin in midfield. Berardi had his best game in a Leeds shirt and Taylor defended well on the other flank. Cooper and Bellusci were excellent whilst Morison run himself into the ground up front. He added a new dimension to the Leeds attacking play and was a handful all afternoon for the home centre backs. Cook again played way above his tender age of 17.

A very good point but in the end there was a tinge of disappointment we didn't take all three after the best Leeds performance since we beat Derby at home. By the time we reached Leeds my toes were just about thawed out but it was all worth it to see a Leeds team with the grit and determination needed to survive in the championship. We still have a bumpy ride in front of us but if we can repeat this approach consistently we should start to climb the table.

Birmingham at home next on the agenda.  Same team and formation me thinks?

MOT.
Posted by Andrew Butterwick at 20:19