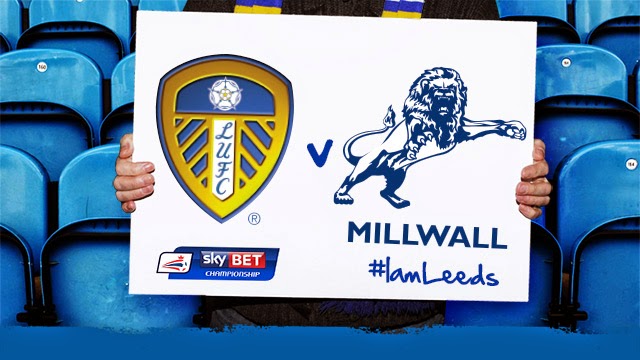 Love was in the air at Elland Road. The travelling Valentine's Fair was resplendent on Fullerton Park car park preparing for the evening rush of young fun seekers looking to entertain their loved ones with a dodgy burger and a ride on the waltzers. Yes romance was alive and well in LS11 and by some strange quirk of the Football League fixture computer this was also the day that Leeds United welcomed one of their most unloved rivals, Millwall, to Elland Road for a hugely significant game in the unseemly battle at the wrong end of the championship.

After resisting the urge to Hook a Duck or Bag a Coconut the Happy Chocker, Quiet One and yours truly were eagerly awaiting the team news inside the Theatre of Hope. Would Morison finally add a goal to his improving form against his old flame? Would Redders stick with the 4-2-3-1 formation that worked so well against Reading? Would Massimo appear in the South Stand gesticulating at the two dozen Millwall fans?  In the end Redfearn kept the same formation and made just one change to Tuesday's starting line up with Austin slotting straight in for the injured Bianchi. After a pint of loopy juice I wagered £2 of my hard earned money on a Morison hat trick much to the amusement of HC et al. You never know he's got to score sometime I thought?

Leeds were straight into top gear as they attacked the kop end oozing with confidence. The left flank alliance of Mowatt and Taylor found early joy testing Millwall's shaky defence and it was young Taylor who created the first real chance on 6 minutes as he got to the bye line and picked out Byram on the penalty spot only for his side footed shot to graze the post. Cook and Murphy had stamped an early grip on the midfield area and Leeds were looking good. Millwall's giant, lumbering centre forward Maierhofer had their first shot on goal on ten minutes but the ball nestled tamely in Silvestri's hands. 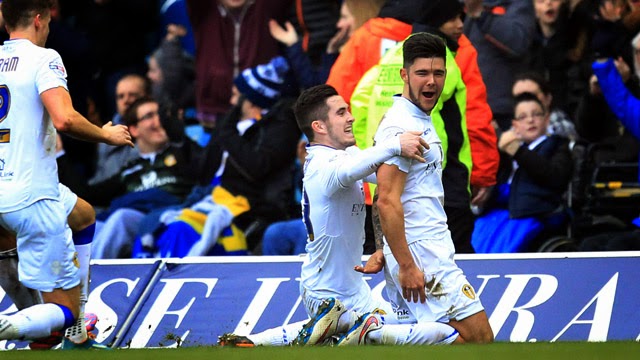 Leeds had settled quickly despite a lengthy delay when Mowatt was injured after making a lunging tackle. Bamba headed over from a free kick before Byram saw his shot deflected for a corner. Fabbrini had the small travelling band of away fans out of their seats as he turned a shot into the side netting. The game became littered with niggly fouls typified by Maierhofer's yellow card for a cynical trip to stop Murphy from breaking free on the half way. With fans beginning to drift away for their half time refreshments Leeds suddenly found a second wind and pushed forward looking for the opening goal. The impressive Byram swapped passes on the right and headed towards the box before being felled by another Millwall trip. Free kick Leeds 20 yards out in the inside right position. Mowatt lined the ball up and clipped a lovely free kick into the top corner of the net with the help of a slight deflection. 1.0 Leeds and suddenly Leeds changed up a gear. Within a minute another attacking move saw Morison make an intelligent run into the left hand side of the box and control the ball well before picking Austin out at the back post. The Jamaican tried a spectacular scissor kick that Forde did well to keep out.


Leeds were finishing a good half strongly. Morison again found space only to see his shot blocked in the box but then squandered an absolute golden chance when Murphy picked up a loose back pass and fed him in one on one with the keeper. Head in hands time for the majority of the 24,000 fans in the ground. That should have been 2.0 and the first goal of his hat trick. There was still time in the half for Leeds to be denied the usual stonewall penalty as Austin was scythed down in the box. To add insult to injury he received a yellow for his troubles FFS. Half time 1.0 Leeds and the home team well on top.

The urinal philosophers were happy if not a little disgruntled the margin wasn't more than the solitary Mowatt goal. "Should have been 3.0 by now" one fan thought whilst another harshly judged Morison with a cutting comment "he'll never score whilst he's a hole in his arse" In general the Leeds family was pleased with the first half efforts. Just need to push on and get the all important 2nd goal now. Millwall's maverick manager Ian Hollaway swapped the giant Maierhofer for the more nimble and quicker Gregory at half time.

The game stuttered for the opening exchanges of the 2nd period as a combination of frequent fouls and copious amounts of lost possession from each side added to the tension in the stands. Supposed transfer target for Leeds Woolford blazed a decent chance over the bar from 18 yards and Angel went close with a low shot that Silvestri let go wide even though it missed by inches................another head in hands moment for me and plenty of other nervous Leeds fans. All of a sudden it was the Lions who were starting to build up a head of steam as Leeds lost their way a bit. Woolford again failed to hit the target with a shot and Fuller so nearly converted a long hopeful ball as the Leeds defence hesitated. 20 long minutes left as I stared at the clock willing it round.

Antennuci replaced Austin and immediately added some much needed impetus for the home side setting up Byram with a deep cross but his spectacular volley went searing over the bar and into the South Stand. Next Murphy jinked past three players and hit a scorching shot that Forde did well to keep out. With Millwall pushing on looking for the equaliser Leeds began to take advantage of the gaps and should have settled the nerves in Elland Road with numerous spurned chances. Mowatt went down in the box and earned a booking for diving that later TV replays would show was justified. Wootton missed a superb chance after a knock back from Morison but it was my hopeful hat trick hero who was the most wasteful as he missed three wonderful chances in the last 10 minutes to win me my bet. Bastard. Maybe the grumpy guy at half time was right?

With only the single goal separating the teams the final 5 minutes was gut wrenchingly tense to watch as I was sure Holloway's men were going to pinch a late equaliser although in reality they only managed 1 shot on target all game. The more than welcome final whistle sounded with Leeds still in front by Mowatt's goal and the home fans celebrated another precious three points for the mighty whites. This was another gritty performance from Leeds spoilt by some very wayward finishing. On another day Leeds could have finished 3 or 4 goals to the good but the contrast between Morison's general play and his finishing couldn't be starker.

Murphy had a superb game well supported by Cook & Mowatt in midfield. Charlie Taylor continues to thrive at left back and had his best game in a Leeds shirt. Overall a good performance let down by too many misses in front of goal and too many sloppy passes in the 2nd half. Bamba had another commanding game at the heart of a resolute back four. In the end Leeds extended their excellent run of form since the turn of the year and have now reached the heady heights of 12th place in the Championship. Wow.

Middlesbrough up next at The Riverside for a lunchtime kick off against the high flying Teesiders. We always beat the Smoggies though don't we?

MOT.
Posted by Andrew Butterwick at 19:59