A watery winter sun and pale blue sky greeted us as we gunned the car up the A19 towards Teeside for our lunchtime clash with Championship leaders Boro. There were lot's of positives for the Happy Chocker, Quiet One and yours truly to debate as we sped through North Yorkshire. Leeds were seeking their 5th win out of the last 6 league games since the cup exit at Sunderland against a team who we always do well against. Also we were looking to do the double over the league leaders just as we did when we last played the league leaders Bournemouth. We weren't getting too carried away though. The Riverside is a difficult place to get a result especially against a home team high on confidence. All in all we were looking forward to another cracking Leeds away day with a good chance of bringing some points back to West Yorkshire. 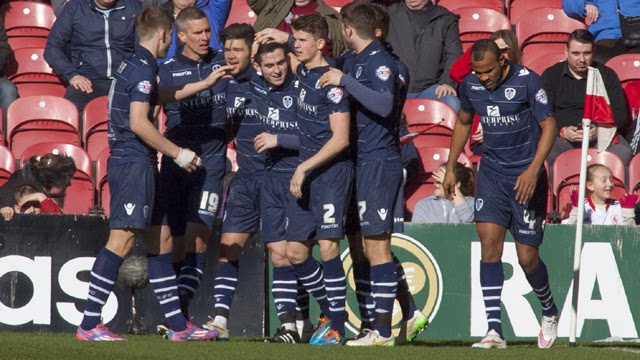 Not surprisingly Redfearn kept the same starting eleven that disposed of Millwall last week as the game got under way in an absolutely electric atmosphere. The 3,000 travelling fans were in good voice drowning out the Boro drummer boy and his Ultras. Leeds flew at Boro from the off not allowing them time on the ball. This tactic paid handsomely on 3 minutes as the imperious Lewis Cook won the ball in the Boro half and raced into the penalty area before screwing the ball back to Mowatt who's thumping shot deflected delightfully into the bottom corner of the Boro net. 1.0 Leeds and the away end erupted in ecstatic celebrations. Just the 87 minutes to hang on to the lead then I thought.

Boro are top of the league for a reason and that is their coach Karanka has transformed the Teesiders into a well drilled unit who play a neat passing game continually looking to bring the dangerous Adomah into play on the right flank coupled with Vossen dropping off the front to pick the ball up in the space between midfield and the front runners. Just because they had conceded an early goal didn't change their approach as they lined up attack after attack on the Leeds back four. Silvestri has his critics amongst the Legions of Leeds fans but this was going to be a performance that would quieten his most fiercest critic as he pulled off save after save to deny the dominant home side. Kike, Vossen and Clayton all had thumping shots turned away by the young Italian goalie as Leeds dug in to defend their slender lead. In front of Silvestri Bamba and Bellusci were marshaling the troops to repel all raiders in scenes reminiscent of the famous Rourke's Drift battle. Bodies were thrown in front of shots heads were stuck in the firing line to prevent the rampant Boro from converting any of the many chances that were flowing their way. On the one time the ball evaded Silvestri's grasp Bellusci was on hand to clear off the line. This was heart stopping stuff.

When Leeds did break out from constant bombardment first Byram and then Wootton found space in the box but couldn't add to Mowatt's opener. Then just before half time the man mountain who is Bamba launched himself at a Murphy corner only to see his header drift inches wide. Half time 1.0 to Leeds and what a half. Leeds had defended like heroes against a very good Boro attack. Could they keep it going in the 2nd half though? 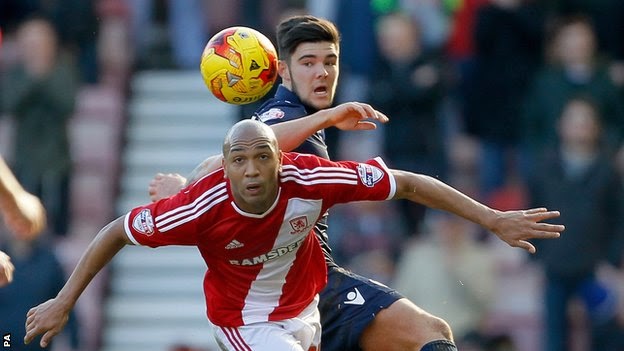 The 2nd half started as the first 45 minutes finished with Boro pressing hard and Leeds trying to nick another goal on the break. Wootton headed against the bar from a rare Leeds corner lifting the decibel level from the away end. "All Leeds are we" reverberated around the Riverside as Leeds defensive rearguard action took on epic proportions. Silvestri saved shot after shot as Leeds conceded corners with increasing frequency but each one was dealt with by the stubborn and resolute back four as if any ball into the box was an insult to their pride. This was stirring stuff from Leeds and when they did get the ball away Morison, Austin, Cook and Byram went on long busting runs relieve the pressure. Morison was denied by the Boro keeper on a one on one and Wootton couldn't quite reach a Byram cross with the goal wide open. Austin hit a stunning shot that brought a desparate save from the home keeper.

Most of the action was at the other end though as last ditch tackles from Bamba, Taylor and Bellusci kept the Leeds goal intact. By now the corner tally must have been up 50 or so it seemed but in contrast to other Leeds teams in the last ten years this one just grows in confidence when the ref points to the corner flag. What a refreshing change? Vossen collided with Mowatt knocking himself out and delaying the game for 10 minutes. This gave Leeds chance to  recharge their batteries ready for the final assault. I could almost hear Bamba imploring his team mates to "Wait until you see the whites of their eyes boys they'll come at us again before the final whistle" Rourke's Drift lives!

Cooper had replaced the injured Bellusci for the final ten minutes with Boro now down to ten men after using all their subs before the Vossen injury. 9 minutes of injury time seemed like a millennium as Boro threw the kitchen sink plus all the pots and pans at the heroic Leeds defensive line. Nerves were jangling in the away end as Marching on Together belted out to help carry Leeds over the line. The celebrations at the final whistle were long and loud. The players were out on their feet and no more so than the much maligned Steve Morison who had had another good game. Final score 1.0 Leeds.

Silvestri was man of the match closely followed by the colossus Bamba but in truth every man deserved a medal after a performance that will live long in the memory with the loyal Leeds faithful. The Boro fans were understandably a bit miffed as we strode back to the car away from the Riverside. You could still hear the Leeds fans singing................was it "All Leeds are we" I could hear or was it the faint sound of "Men of Harlech" drifting up from the South African veld? Either way we'd won away for the third time on the bounce and we were frantically assessing the league to check how many points we are away from the play offs. Delicious!

Brighton away on Tuesday. Again work commitments mean I wont make it to the Amex but I should just get to Elland Road for the beamback. A 4th win on the road on the cards me thinks? All of a sudden there is plenty of joy on Planet Leeds. Long may it continue.

Posted by Andrew Butterwick at 18:15