In the weird and wonderful world of Leeds United a rather laboured win over a poor Bolton side followed by a backs to the wall smash and grab win at Cardiff had injected some much needed optimism into the club. Head coach Evans is now aiming for a top ten finish, fans were fair salivating over the prospect of a 3rd win on the bounce at Blackburn and the words "sucked into a relegation dogfight" have been put back in the cliche cupboard by the various media outlets. Life is never dull following the mighty whites!

Blackburn has not been a happy hunting ground for Leeds though so there was an understandable whiff of apprehension in the car as the Happy Chocker, Quiet One and yours truly headed over the hill in bright sunshine towards Ewood Park for the lunchtime kick off against the Lancastrians. There was plenty to ponder as we made our way out of God's county and into the land of the devil though. Would Coyle, Cooper and Wood be fit? What would this week's formation be? How many wingers will be on the bench this week? After a pre match drink at The Golden Cup and a march down the hill to the ground the teams were announced. Murphy dropped to the bench for Diagouraga and Wood returned after injury to the bench. Leeds set up with a tight 4-1-3-2 formation.

There was a lively start to the game on a less than perfect pitch. Pocket dynamo Bridcutt was first to threaten the goal on 4 minutes but his shot went wide. It was Rovers who were looking dangerous though as they made good use of the width left by Leeds' narrow midfield. Graham and then Duffy went near with headers and Berardi had to be alert to cut out a good cut back from Watt. The 3,400 travelling fans watched nervously on from the Darwin end as the Leeds back four dug into to repel the early home attacks. Gradually Leeds began to get control of the game with midfield promptings from Cook, Mowatt, Diagouraga and Bridcutt providing good service for the hard working Doukara and Antenucci up front. On 15 minutes Doukara was hauled down on the edge of the box presenting Mowatt with the ideal opportunity to test Steele in the Blackburn goal. The young Leeds star didn't disappoint as he curled a wicked free kick towards the top corner which had Steele flying across to tip the ball over for a corner. 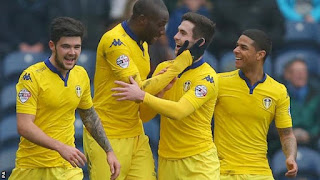 Leeds steady progress was interrupted when Akpan should have done better with a header from another set piece on 22 minutes. As the game reached the half hour mark Leeds were starting to dominate their Lancastrian opponents. Doukara (twice), Bridcutt, Mowatt and Berardi all tried their luck with shots after some impressive build up play. Surely this wasn't the same team who were utterly shambolic at Brighton just two weeks ago? Silvestri had to be on his toes though when Graham turned Bellusci in the box as he stopped the ex Leeds striker's shot for Taylor to clear to safety. Leeds were about to stun the home crowd though. On 33 minutes another sweeping move ended in a corner for the men in yellow. Mowatt swung in a lovely ball to the back post where Bamba arrived in a flurry of arms and legs like a flying octopus to volley high into the Blackburn net. Get innnnnnnnnnnnnn! 1.0 Leeds and no more than they deserved. The decibel levels in the Darwin end doubled as the long suffering away fans started to anticipate a third win on the bounce. Mint!

Leeds were now purring and cruised to half time with no little panache. HT 1.0 Leeds. The urinal philosophers were beside themselves. "F****** brilliant" shouted one happy fan, "We could run away with this in the 2nd half" suggested another drunk on the sheer positiveness of the first 45 minutes. "Still only one nil though" stated a slighty grumpy pessimist. The 2nd half got under way with Leeds still looking dangerous. Antenucci had a penalty appeal turned down after a neat interchange with Doukara appeared to hit a defender's hand in the box. Leeds were defending doggedly whenever Blackburn attacked. Bamba and Bellusci were towers of strength at the back well supported by Taylor and Berardi. As the hour mark approached Leeds were still holding firm and looking dangerous on the break as the home side took more and more risks to try and pull back the one goal deficit.

On 63 minutes Jackson replaced Watt for Blackburn offering a bit more electric pace for the home side. Any fears that Leeds were going to face a torrid last twenty minutes were thankfully dispelled on 70 minutes. Leeds conceded another corner but cleared to Mowatt who switched a delightful ball into the path of Antenucci just inside the Blackburn half. The Italian's little legs were going twenty to the dozen as he headed towards the goal with Rovers defenders trailing in his wake. He had a heavy touch as he entered the box before dinking the ball over Steele into the net for the 2nd goal. Carnage ensued in the away end as the Leeds fans celebrated yet another breakaway goal from the Italian forward. 2.0 Leeds. Happy Days.

Dallas replaced Mowatt on 74 minutes as Leeds prepared for the final assault from Blackburn. Wood replaced Doukara with 5 minutes remaining as Leeds eased to the final whistle. On 89 minutes a nervous tremor exploded amongst the away fans as Jackson hooked in a loose ball to give Rovers a glimmer of hope. My heart sank when the 4th official held up a sign showing 6 added minutes. 6 minutes? Unbelievable. The woman next me was having a panic attacking murmuring something about Bristol City away as I searched for some fingernails to bite. Blackburn launched ball after ball into the box but Bamba and Bellusci held firm. After an excruciating 9 minutes, yes 9 minutes added time the ref finally blew his whistle for the last time. FT 2.1 Leeds.

Winning away is a special feeling. Even the hike back up the hill to the car seemed to fly by. The whole team were impressive today. Difficult to pick a man of the match. All the midfielders did well, the centre backs were awesome, the full backs were inspirational and Ant and Douks put another impressive shift in up front. Magic. 3 wins in a week has put a completely different complexion on the final run in for Leeds. Some fans were adding the points off play off places equation. Even I'm not that optimistic! Huddersfield up next at Elland Road just as we hit some form. Should make for an interesting West Yorkshire derby?

MOT.
Posted by Andrew Butterwick at 17:59

Surely the "electric" pace would have come from Watt not Jackson?

You got it. It was my attempt at a reverse pun!

Top post again Andrew, B&HA is becoming a distant memory. The return of Berardi seems to have re lit a fire that everyone thought had gone out.