Top of the Table clash with Charlton

Thanks to Transpenine Express' excellent decision to carry out their maintenance work over the weekend there were no trains to Leeds. Brilliant. So The Happy Chocker's car whisked the quiet One and yours truly to the Theatre of Hope for the top of the table clash with Charlton. As we deposited the car in the car park and made our way done Elland Road the howling wind was trying it's best to bend the car park Poplar trees in two. Difficult conditions for this mouth watering clash. 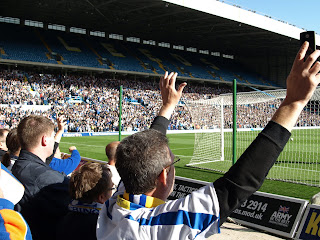 Mr Morse, the underpaid programme seller, was busier than usual coping with both the wind and the sell out (non upper East tier) crowd of over 31,000 for this 3rd Division clash.
After an interesting chat with big Steve over how much he'd enjoyed the last two games!!!!!!!!! we took the familiar route to our seats behind the goal. The bright September sunshine was misleading as the vicious wind swirled around inside the famous old stadium depositing all sorts of debris on the pitch. Two old ER favourites were in the away team in Sammy & Fraser. Both received a generous reception from the home fans.
Leeds had Bromby at full back but were missing their newest Scottish international, Mr Snodgrass, who hadn't recovered from his injury from Tuesday. Killa deputised in a now unbalanced midfield. 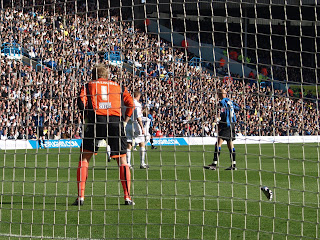 Leeds started the brighter and had the better of the opening twenty minutes. Leeds had the difficult wind at their backs as they attacked the South stand and they seemed to settle quicker than their opponents. It was Charlton who nearly opened the scoring though after Fraser scampered down the right in familiar fashion before delivering a perfect cross onto the young Shelvey's head who glanced the ball inches past Casper's post. The near miss fired Leeds on and first Beckford nearly finished a sweeping move and then Bradders jinked past Fraser to hit a beauty of a right foot shot that Fred Elliot turned away impressively in the Charlton goal. Not bad for a butcher? Becchio was causing his old team mate Sammy problems but had to give way to Enoch before half time after picking up an injury. Treatment room will be full again this week.
Although the game was devoid of much good football due to the inclement conditions there was a tension and excitement to the game that kept most fans enthralled. Of course there were the "experts" in the crowd who were unforgiving of the inevitable mistakes that come when playing football in a galeforce wind.
Half time came with the game goal less. the back room staff spent the interval litter picking on the pitch...............which seemed a bit of pointless exercise as the wind seemed to be blowing more rubbish on than they were taking off!
Leeds attacked the kop in the 2nd half but found it difficult to apply pressure as the south Londoners adapted to the conditions better and kept the ball lower than their Yorkshire counterparts. Casper was called upon to block a shot from a Charlton striker before Shelvey tested him from distance. There was a huge sigh of relief from this nervous fan as he collected the fluctuating ball with ease. 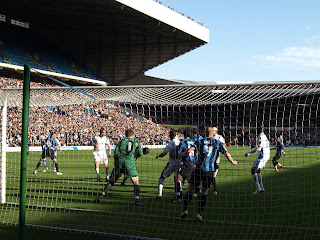 Robbo came on for Hughesy with 25 minutes to go but apart from a couple of touches failed to make any impression. As the last 10 minutes approached Grella replaced a tiring Killa and Leeds started to get up a head of steam for one last push but too often a white shirted player lost control of the ball or gave it away in the testing conditions. Enoch brought another good save from Fred Elliot in the visitors goal. I say Enoch brought another good save...............
Enoch then escaped on the right only to try an outrageous cut back onto his favourite left foot only to collapse in an embarrassing heap as one leg tripped over his other. Somehow don't think he'll get on Strictly!
The game ended with Leeds applying the most pressure they'd done all match but it was all a bit too little too late on a day when the conditions prevailed over the football.
On the way home we consoled ourself that we are still top of the league, another clean sheet and we keep a nice 3 point cushion between us and the pack, despite the team struggling to come to terms with the very difficult conditions. It's now two weeks before our next league game and given our lengthening injury list that can only be a good thing.
This was the third game where we have not played at our best but we've ground the results out. Sign of a champion team? I think so.
Darlo in the Mickey Mouse cup on Tuesday.
Can't wait.
MOT

Posted by Andrew Butterwick at 17:59

Great report as usual MOT. I think the break has come just in time to give the guys a rest and help the injured players to recover.

Still on top but more importantly, now 5 points ahead of BR in 3rd place. Dont care where we finish as long as its in the top 2!!.

Cheers Peter,
I think you're right about the break but don't forget we've got to put a reasonable strength team out on Tuesday night. Looking forward to having Enoch and Tresor up front! lol
MOT