A weekend without a game?

It's inevitable that any blank weekend in the normal season is going to disrupt the emotional and psychological state of any true fan. So it's not surprising that I felt rather strange yesterday. The morning was devoid of any worry about matchday travel plans and the soothing alcohol that usually helps chase any thoughts of defeat or failure away. So I was reduced to doing "normal" things around the house. Mrs MOT had a skip in her step though as the prospect of having access to her other half for the whole of Saturday clearly pleased her. As I feared the "normal" things involved a shopping expedition into Leeds, so as kick off time approached I was whistling the MOT tune as load as I could drawing some puzzled looks from the eager shoppers in Next! 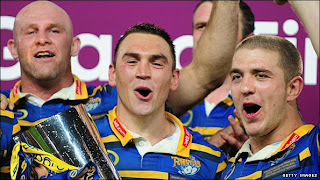 All was not lost though as there was a decent match to watch after all, no not the stuttering stream from the Ukraine of England's inglorious defeat on my laptop, the Super League Grand Final from the home of Manure...............and what a match it was as the Rhinos and Saints went head to head in a skillful and brutal encounter that saw the Leeds Rhinos deservedly claim their third straight title............cue a healthy chorus of MOT ringing round the Theatre of Shite, brilliant.
Back to football and this week once again the management and ownership of Leeds United Football club has appeared in the sights of the Football League hierarchy, specifically Lord Haw Haw. This time the FL are seeking "clarification" as to who the owners of the club are so that they can confirm they pass the "fit and proper" test that is now a condition of teams playing in the league. Now on the assumption that the person who passed the original test was Capt Birdseye himself it can't be too stringent an exam so I don't think we've got too much to be worried about. The real interest from Lord Haw Haw is knowing exactly who it is who owns the club................ie who has the controlling shares in the Forward Sports Fund, apparently not Mr Bates, which I am sure would be of passing interest to the thousands of whites fans dotted about the world. Of course there is the horrible possibility that we could be in line for sanctions if the situation is not resolved to the FL's satisfaction and with the past relationship between MaWhinney and Bates on the deep freeze side of frosty the words "points deduction" could come into the equation? Doesn't bear thinking about.
Finally we have drawn the mighty Grimsby, "you only sing when your fishing" Town in the next round of the Paint Pot Trophy at ER. Another night of high cup passion in LS11 for that one then.
Have a good week and if anyone's watching BBC 1's Question Time from Hull on Thursday evening I shall be in the audience asking the difficult question. "Does the panel think that Phil Browns uses too much fake tan?" That should be a good starter for ten!
MOT
Posted by Andrew Butterwick at 09:06