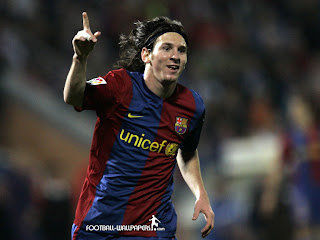 Football never ceases to amaze me. Take this week. The Special One returns to Chelski with an Inter Milan team with no Italians on the team sheet and the frenzied media pack seemingly more interested in what Jose had to say rather than what happened on the pitch. If they had cast their eyes away from the dug out they would have seen the men from Milan dispose of the men in blue without too much trouble. A fact that first Drogba (nominated for 6 oscars but yet to get a gong) and more deliciously John Terry found too much to stomach. Terry cried to the referee at the end of the match "it's not fair" and then stormed off the pitch like a spoilt kid stopping only to run over one of his own security guards in his haste to get away from the ground. True behaviour of a "leader of men"
Elsewhere Fulham had a magnificent win against the once mighty Juve and Liverpool gained the Spanish Waiter another stay of execution by savaging Lille, whilst at the Nou Camp Mr Messi showed everyone just who is the best player in the world at the moment with another stunning display.
But the news that knocked Mr Terry off the top of my chucklemeter was that of the end of the fake tanned one at the Codheads (Hull City). Mr Brown has lasted longer than I thought he would this year but the last minute winner by Bendtner for Arsenal was the final nail in his coffin. His vanity didn't allow him to go gracefully but I am sure he will resurface in a TV studio near you pretty damn quick preening himself. His replacement Iain Dowie, possibly the ugliest person in football, has an impressive record in keeping teams up.............his last appointment was with Newcastle as he helped steer the bar codes serenely into the championship with Mr Shearer in charge..................I'm looking forward to my trip to the KC stadium next season.
At ER Lord Grayson has been regrouping and considering his options for the final spurt or will it be a stagger to the finishing line.? Last Saturday's performance was disappointing and with two key games in the next week against Millwall and Norwich looming the dark clouds of the play offs will be on the horizon if we don't grind out 4 points from the two intriguing clashes.
Millwall arrive at the Theatre of Hope on Monday night on a hot streak of form and let's face it we've not done overly well against the Lions of Bermondsey of late. Confidence will be replaced by nervous anticipation in the crowd for a game that neither team can afford to lose. Too close to call for me............................alright go on then 2.1 Leeds with a Dickov winner in the last minute.
So with a Saturday free to consider all the different scenarios of just how many points will be needed to go up automatically I suspect that come Saturday tea time or Monday bedtime I will arrive at the same conclusion......................we won't know until May 8th and between now and then there's gonna be lots of twists and turns. One thing for sure the nerves are going to be jangling all the way to the last game. Guess what?
Can't wait.
MOT
Posted by Andrew Butterwick at 07:51