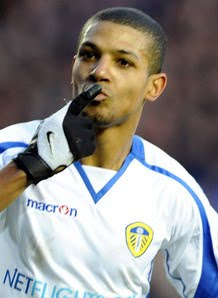 It's been a strange week again. Election fever has gripped all and sundry. Clearly the end of season awards, the LAFTA's, has taken everybody's mind off that other electoral squabble between the grumpy "it's not my fault we're in this mess but trust me I can lead you out of it" Scot, the "if I roll my sleeves up I might look like Obama" Tory hopeful and the "OMG they might actually elect me WTF do I do now" Liberal chappy. So with Kissy streaking ahead in the polls don't forget to vote, vote, vote for your player of the season after you've read this little missive.
Big question on the football front will surround Mr Beckford's starting position. I think Lord Larry will recall Jermaine from the naughty step with his tail suitably between his legs and give him a starting position against the Dons. I also think that the faltering Jonny Howson will be the player to make way allowing Mad Max to run riot on the flanks....................that's always assuming that Becchio has recovered from his calf injury. Naylor's place should be safe more due to the lack of quality replacements rather than his form, which has been dodgy to say the least of late.
So just 3 games to go. 3 games that will decide if we go up automatically or have to suffer the torture of the play offs again. The first match against a depleted MK Dons team with a manager already committed to leaving the club at the end of the season and safely sat in the wilderness of mid table looks easy. But of course Leeds don't do easy as they proved last week against a team with no centre halves and struggling against relegation. The first step to the relative heaven of the Championship will no doubt have it's twists and turn again but surely we can't fail to beat the Franchise Dons and heap pressure back on the chasing pack to respond? I know we seem to hold regular master classes on how to balls up seemingly winning positions but we are still remarkably in the precious 2nd spot.
One thing is for sure nobody will be biting their nails as they all disappeared about 4 weeks ago. A big crowd at ER then for this one with the final game against Bristol Rovers already a 39,000 sell out the success starved hordes will be expecting nothing less than 3 straight victories to ease the mighty whites back into the Championship. Even Billy's Statue's had a spring clean ready for the promotion party. Now what could possibly go wrong? Don't answer that!
Seat belts fastened, fingers crossed & let's get behind the team as one........Marching on Together!
Can't wait.
MOT
Posted by Andrew Butterwick at 19:43