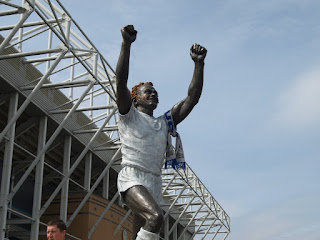 My nerves are shot! I dont know how much more of this I can take!!!
I would start with Becks on the bench next week, though, and bring him on when needed. Watt sounded good though, but the Defense.... well I dont know what can be done about that. I miss Paddy and his head band! LOL

Sarah,
You're not the only one who misses Paddy, the defence is miles more effective when the bandaged one is in the team.
Thanks for the comments
MOT

jim says finally simon has seen sense i think the midfield has been a bigger problem than the defence Doyle and Howson too lightweight Killa gives ball away and Snoddy thinks hes a centrel midfielder all of a sudden we had more bite yesterday in there and i think this will take pressure off defence although set piecies and Naylors stand offish approach are a problem.