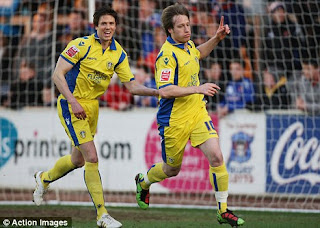 The fixture list at this stage of the season throws up some intriguing fixtures. This weekend is no exception with Millwall travelling to the Galpharm tonight, Charlton hosting stuttering Norwich & Swindon having what seems to be the easiest task playing Walsall at home. With a meagre 3 points separating ourselves in 2nd and Swindon in 5th & what now seems a bridgeable gap of 6 points keeping us off top spot the permutations of where we will stand at 5pm Saturday are numerous. We could be a tantalising 3 points away from top spot and 3 points clear of 3rd or we could be in a 3 way tie for 3rd place 2 points off the precious 2nd automatic spot. Thing is if we continue our recent winning run whatever happens we will have taken another giant step towards promotion.
The most intriguing game is the one at the Galpharm tonight. Clearly the Tesco bags need to win to cement their play off position.............but that will help the mighty whites so that will stick in the throats of lot's of "at least we beat Leeds" Hudderstoon fans. It's possible that the Sky cameras will bag a scoop as they show two sets of fans crying if Hudderstoon manage to win. Can't wait. I'm not sure I will be able to watch the game as I've been asked to take part in a new TV programme........................a football fans version of "Stars in their Eyes" So when the doors open and the dry ice clears I will walk down the steps and announce. "Tonight Matthew I'm going be.........................a Huddersfield fan" Delicious.
Our visit to Kent tomorrow to play Gillingham will be another stern test for Leeds. Although they sit precariously one place above the relegation zone they have only lost 3 times at home, the same as Leeds. Compare that with their abysmal away record where they have yet to win after 21 attempts. Bizarre? One sub plot will be in how the home fans treat their Jesus lookalike midfielder Adam Miller. He has been on the end of abuse from his own fans all season but scored a priceless equaliser against Brighton on Tuesday.
Lord Grayson is unlikely to change his winning team so Mr Beckford will spend another game kicking his heels on the bench waiting for his chance to prove his many doubters wrong that he has already given up on Leeds. I still think he's going to score at least one more vital goal before he sails into the sunset at the end of the season. The pairing of Mad Max and Becchio have been a revelation and everyone of the travelling hordes heading for Kent will be expecting another fizzing performance from our new multi national strike force. The confidence has returned to Leeds and their fans after the last three matches have seen steadily improving performances and more importantly wins..................but the horror show against Swindon is still fresh in the memory....................................so nerves will still be jangling and stomachs knotted when the whistle blows at 3pm tomorrow but if things go to plan we might just be dreaming of an unlikely title win by the time the classified results are read at 5pm.....................we couldn't possibly do that could we? Who knows but there's one thing for certain...................
Can't wait!
Keep that seat belt fastened & no blinking just 4 games left now!
MOT
Posted by Andrew Butterwick at 07:56