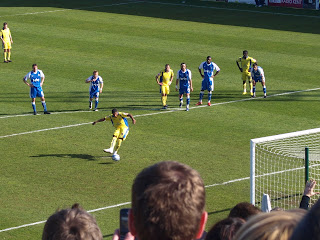 Buoyed by Millwall's failure to beat the Tesco bags the night before the Happy Chocker, Quiet One and myself travelled South with confidence high. Sunshine and a cloudless sky added to the "life is good" feeling. No road works, no traffic jams and a trouble free run all the way to Gillingham. We found a car park with spaces in near the ground and in 5 minutes we were in the Livingstone Arms having a pre match drink. Things were going well...................too damn well?
The pub was predominantly full of Leeds fans and as many thirsts were quenched songs in praise of Max Gradel and Lucciano Becchio belted out drowning out the commentary on the Manchester derby. That "feel good" aura was all around. 3 wins on the bounce, just 9 points needed now for automatic promotion and we were about to play a team desperately trying to scramble away from the dreaded drop zone. What could possibly go wrong?
Inside the ground the 3500 Leeds fans perched precariously on the temporary stand made from scaffold poles in the hot sun. Beckford continued on the bench as the team started unchanged from Tuesday's fine win. The hosts were without their first choice centre half and were further hamstrung when the replacement left the field after just 5 minutes with a nasty injury. This was going to be easy!
But this wasn't the Leeds that beat Carlisle etc.....................this was a much slower version who struggled to get into the match and it was no surprise when the Gills went ahead in under 10 minutes when a long throw somehow was allowed to bounce and the Jesus lookalike, Miller, looped the ball into the net in front of the stunned Leeds fans. Bollox!
Maybe the goal was the kick up the bum we needed and sure enough within a couple of minutes Mad Max found himself free but his shot was somehow saved and we remained one down. The next 15 minutes were a nightmare. Leeds just weren't at the races as they were over run by the home team. Two sloppy goals and we were three down after just 30 minutes. For some fans it was all too much as the left early...................yes with an hour still to go! I couldn't believe what I was watching. Does nobody want the second automatic spot? We had lost it, Swindon had lost it and now Millwall had ceded it back to us but we were trying to give it away again? The only solace was the news that both Charlton and Swindon were also losing..................bizarre!
Leeds did pick their game up a little and when Becchio controlled the ball turned and dispatched a neat finish into the bottom corner a flicker of hope sparked amongst the long suffering away fans. Still 3.1 at HT was a score that was welcome from Bermondsey to Charlton to Swindon.
Now I would love to say that Leeds came out for the 2nd half and tore into the Gills and made a real game of it...................but they didn't. Yes it was better than the first 45 minutes but then again it couldn't be any worse. Beckford and Parker came on after 10 minutes and Leeds looked more threatening. Well they did when they got the ball on the floor, which wasn't very often, most of the time they seemed drawn into an aerial battle with their much bigger hosts.
Grayson's final throw of the dice was changing a less than happy Becchio for Sanchez Watt. The Arsenal youngster did make a difference as his slick footwork added a bit of class to proceedings and when he skinned his marker out wide and moved into the box a goal looked on the cards......................but instead of lashing the ball goalwards he settled for a square pass and the move fizzled out. This lifted our hopes though. If we could just get one we might just snatch a point. Beckford had a point to prove and when he was pulled down as he got between the defender and the goalie the ref, Alan Wiley pointed to the spot. Beckford converted. 3.2 with 5 minutes left. C'mon Leeeeeeeeeeeeeeds let's pinch one.
But unrealistic hope was just that and the Gills were able to play the last few minutes in the safety of the corner flags. So Gillingham got a victory that more than likely will keep them up. As for Leeds their soft underbelly was ruthlessly exposed today. Their defending for the first two goals was just downright negligent and the 3rd was farcical. As the Happy Chocker kept telling me we were never going to come back from 3.0. Yes the results went our way elsewhere but this was a massive opportunity to take a giant leap to promotion spurned. So whilst our destiny is still in our own hands this was another game in a long line of frustrating performances that are specifically designed to torture some of the most loyal fans in English football.
MK Dons next at ER on Saturday. 3 games left and still everything to play for. Not sure my nerves can stand this. Please keep your seat belt fastened.
Unbelievably I can't wait.
MOT
Posted by Andrew Butterwick at 21:56