One benefit of playing Yeovil at lunchtime on a Bank Holiday Monday is that the motorways between North Yorkshire and Somerset are empty. So the faithful VW Golf with myself, Happy Chocker and the Quiet One aboard made light work of the 265 miles to Huish Park Yeovil. The journey was uneventful other than bumping into Peter Lorimer devouring a full English at the services. After a pre match pint to settle the nerves we were inside the compact home of the Glovers.
The anniversary of the tragic death's of Kevin Speight & Chris Loftus was high on everyone's agenda. A minutes silence and the "turn your back for a minute" demo went off well. Even the home crowd applauded the bizarre sight of the vast army of visiting fans looking the other way for the first minute of the match. The poignancy and sense of injustice that nobody has been prosecuted 10 years on from the murders fired up both the crowd and the team. 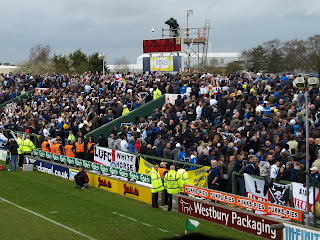 Larry had shuffled his pack in the face of the gathering storm of promotion meltdown. Bromby came in at full back for Lowry and Gradel started up front. Mad Max's selection wasn't universally welcomed amongst the crowd. After his dazzling initial impact at the club his recent showings have been ......................let's say indifferent. Today would change that view.
Leeds started well against a Yeovil team who's strikers had been as ineffective as ours in recent games. For 30 minutes Leeds gradually ground out some confidence in their own ability through solid teamwork and passing the ball predominantly on the deck. The defence looked shaky though and when Higgs came for his first cross and flapped at it like a demented blackbird I feared the worst. What we needed was a goal. You know those things we used to score? And we did from an unlikely source.
The pedantic referee gave Leeds a free kick when he should have allowed play on as Beckford was free bearing down on goal. Killa took a quick free kick and when Howson hoisted a ball to the back post there didn't seem to be any danger.....................but a back pedalling Naylor managed to head the ball back towards the goal and over the goalies head and into the net. That wonderful feeling when Leeds score a goal came flooding back from the depths of my memory bank. Brilliant.
Just like buses you wait all that time and two come at once as Naylor popped up again 5 minutes later to grab his second goal as he lost his marker at a corner. Maybe that early start was going to be worthwhile after all? We were 2 up after 35 minutes and cruising. More chances followed as Leeds threatened to put all their recent frustrations behind them and run riot. Mad Max was central to most of the good along with Killa pulling the strings in midfield. Leeds marched off to a noisy ovation from the rejuvenated whites fans.
So with a healthy 2.0 lead going into the 2nd half and the team playing well nothing could go wrong................could it? Especially when we stormed into them for the first part of the final 45 minutes. Naylor was all over the place trying to get his hat trick (I know how daft is that?) the home goalie was having one of those games he can only dream about and everything in the garden was rosy. Maybe just maybe automatic promotion could creep back onto the agenda?
Then there was a large thump that could have been heard back at Elland Road. That was us coming back to earth with a thud. Yeovil scored after sloppy defending failed to mop up even more sloppy passing in mid field. Game on. Yeovil got a whiff of a chance and went for Leeds' throat. The defending that had been shaky all afternoon started to crumble as did my new found belief in the cause. Yeovil aren't that good a team and yet we had allowed them back into the match and we were now hanging on like a team of novices. "Just keep hold of the ball" I screamed as another aimless clearance went downfield to Mr Nobody. When the ball went into the Leeds box it took an eternity to clear. It was like watching a team in slow motion. My blood pressure was off the scale and my watch had started to go backwards. How can a game change so much? Johnson came on for Killa and Watt for Beckford for the last couple of minutes. Johnson didn't do anything for the blood pressure but Watt sparkled in his brief cameo. Then the ref blew the whistle. It was like the relief of Mafeking. 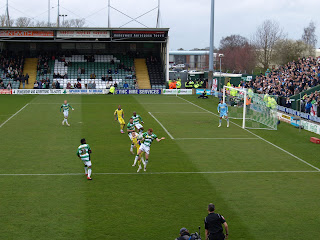 As we made our way out of the ground a gruff Leeds fan commented " Why can't we win f****** easy?" Nobody had an answer but we all knew where he was coming from.
Mad Max got my vote for MOM today with a skillful and industrious stint alongside Mr Beckford up front. He made things happen and was unlucky on a number of occasions as he found his shooting boots in front of goal. After Grella had been given the shirt for the last two games Max has certainly put his case for keeping the starting spot. There won't be many arguing with him after today?

The relief at the win was replaced briefly by a mini panic in trying to find where our car was. Note to self: When you park in an industrial estate make a note of which street you've parked in.

So we're back on the winning trail and with two winnable games against Southend and Carlisle coming up. With Millwall & Swindon both winning it is fast becoming a game of "who blinks first" for the second automatic spot. Keep those seat belts fastened. There's still a lot of turbulence before we land.

I'm starting up a Leeds podcast and we're designing the twitter and facebook pages. I love the image you have of the crowd with their back turned and was wondering if we could use it as the header for the pages?