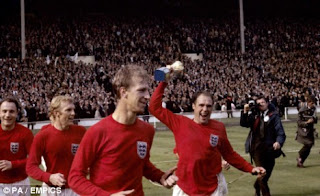 It's not often that you bump into an English World Cup winner but that's exactly what happened on our way to Reading for the latest Leeds Utd away day.  Sat in the same carriage as the Happy Chocker, the Quiet One and yours truly was the one and only Jack Charlton so it was only natural that we introduced ourselves and chatted with the Leeds legend.  "What did it feel like when the final whistle went in the World Cup final Jack" I enquired?  A glint came into the ageing eyes of our one time Giraffe centre half...."Well to tell you the truth the first thing I did was run to our kid and give him a hug and then I set off to run to the rest of the team but I couldn't..I just sank to my knees"  "What.....with the emotion of it all" I dramatically asked? "No I was knackered" came the simple answer from the straight talking elder statesman of Football!  I thanked him and we returned to our seats to digest the fortunate chance encounter.

After the excitement of our chat with Jack the rest of the journey was a bit of an anti climax.  Pre match drinks in the strangely named "3 Guineas" Pub alongside the train station was the usual mix of optimistic speculation about our chances and the boisterous antics of a pub full of Leeds fans.  One particular fan, Mr Skelton, was looking slightly the worse for wear after his exertions at the Primal Scream gig the previous night.  I am sure he shouldn't look as grey as that? 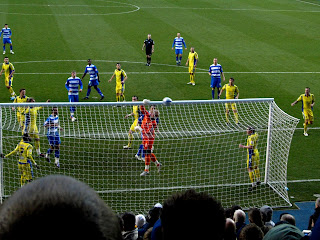 The freezing cold weather didn't stifle another terrific away following for Leeds as  they cranked up the volume as the match got under way.  Leeds started with the same team as the week before and ex Leeds star Ian Harte filled the Reading left back spot.  The game stuttered rather than burst into life in the first 15 minutes.  Both sides seem to cancel each other out as they battled for the upper hand.  The widely predicted "cracking game" was no where to be seen! Reading were playing a tight pressing game that disrupted any attempt Leeds made to pass their way through the home defence.  Becchio nearly got his head on a cross from Snoddy but other than that the home goal didn't look that threatened.  At the other end the Reading attack was meeting stiff resistance from O'Brien and Bruce and the rest of the suddenly resolute Leeds defence.  Kasper was also resisting well as he tipped over a corner that was just creeping under the bar.  Leeds got a free kick in a dangerous position but Snoddy's attempt went tamely into Federici's arms in the home goal.  I know it was cold but this game was not setting any pulses racing as it meandered to half time.  Mad Max brightened proceedings with a back healed clearance off his own line to prevent a Shane Long header and then went close to losing the plot as he had a "handbags" session with a Reading player just on HT.

Whilst I was glad of my many layers of clothing in repelling the bitter cold there were a number of Leeds fans who were clearly too warm as they removed their shirts and swung them around their heads paying homage to Andy Hughes during the interval.................beyond the call of duty, Jon, me thinks! 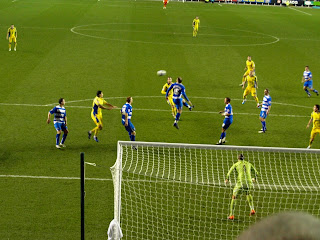 The 2nd half continued to scream 0.0 as both teams searched for the key to unlock the respective defences.  Ian Harte struck a clever free kick that Kasper did well to turn round his post. Snoddy jinked into the box and drove a teasing cross into the 6 yard box but the effort was cleared. In between it was just stalemate.  On the hour Reading brought on the lanky Kebe.  Now quite why he had been sat on the bench for 60 minutes will remain one of the mysteries of the weekend as he immediately took to mullering George McCartney down the Leeds left. Time and again he left him for dead and crossed worryingly into the heart of the Leeds defence.  I began to worry for the first time in the match.  Surely someone will figure out McCartney needed help?  Errrr no he was left to fend for himself and continued to lay not one tackle on the impressive winger.  Shook into action by the success of the Reading substitutions Lord Larry threw on McCormack and Paynter for Becchio ( he certainly didn't score more than Berbatov today!) and Gradel as the game tried to cram enough action into the last 10 minutes to make up for the previous very average offering.  The momentum was with the home team, inspired by Kebe, they launched into Leeds with vigour.  In doing so they left them selves stretched at the back.  They nearly paid the ultimate price as Howson picked up an intelligent ball from McCormack and smacked a superb drive that Federici just managed to turn round the post.

Despite the final flurry of action the game ended 0.0.  Not many people will have forecast that in what was a disappointing game.  Reading seemed to be able to smother any of Leeds' attacking options but not then have the fire power themselves to do any damage until Kebe joined the fray.  Kasper had another good game with some outstanding saves and in front of him O'Brien and Bruce were commanding.  This game won't last long in my memory and failed to get too many excitement juices flowing.  It was a point and a clean sheet though and we remain in the play off positions so all in all a satisfactory result.

Leeds have now gone 6 games since they tasted the bitter pill of defeat.  The foundation of the run is the steely resolve that has sneaked into our defence of late mainly due to the direction of Andy O'Brien. If we can build on that and add to this clean sheet we will start to embed ourselves in the play off places and beyond. That probably say's more about the tightness of the championship than it does about Leeds though.  Crystal Palace are next on the agenda back at Elland Road.  Can we reach 7th heaven with a win? Time will tell.
Can't wait.
MOT
Posted by Andrew Butterwick at 00:04