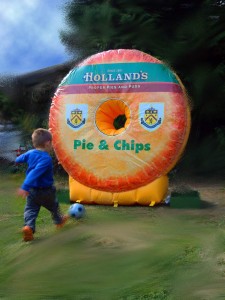 Thankfully the arctic weather has mellowed in time for today's trip over the Pennines to meet our pie munching rivals from Burnley.  I don't know if it's the fact that Burnley have had a long commercial association with Hollands Pies but I can't help thinking of the classic film "Chicken Run" when Burnley are mentioned.  They are what I would call a very traditional, no nonsense Football club with absolutely no intentions of getting "ideas above their station" as my late Grandma would say.  They have always had a good footballing pedigree and had the odd flirtation with success in the early 60's as the fruits of their much vaunted football nursery spawned home grown players who were good enough to win the League and then reach the quarter finals of the European Cup and the Final of the FA Cup.  Heady days for the Clarets. Of course Leeds fans of a certain age will always see Burnley as the team that were unfortunate to be on the end of "that" mazy dribble and shot from the sublime Eddie Gray on a sandy pitch in the early 70's that is still repeated on the pre match montage at Elland Road to this day.

So enough of the history what about today's game? Leeds go into the match seeking to stretch their unbeaten run to 8 games and solidify their place in the top six.  Burnley's recent dalliance with the Premier League has given them a resilience and resolve that will be difficult to break at their compact and "homely" ground.  I will be at my most apprehensive when Jack Cork and Iwelumo are in possession and testing our more robust, Andy O'Brien inspired, back four. The mighty whites will have their own danger men in the shape of Jonny Howson and Lucciano Becchio though and my optimistic antennae are already signalling a cracking game finishing with a late winner for Leeds to send the Leeds hordes home happy with a 3.2 success!

I can't go without mentioning the ongoing contract negotiations at the Theatre of Hope. Becchio, Kilkenny and  the much maligned Johnson are still keeping their agents busy in trying to negotiate a new deal.  Whilst enough has been said about Bradders I am starting to get worried about Killa and Lucciano. Whilst I fully support a sensible approach to the wage structure at the club that doesn't allow the club to be held to ransom by blood sucking agents it would be a massive body blow to the club if Becchio or for that matter Killa were to leave.  Probably more impact than Beckford?  Other championship clubs are circling like hungry vultures to pounce on any chance of enticing the free scoring Argentinian away from Elland Road. Surely common sense will prevail on this one?

Time to get ready for our trek to Burnley now. Leeds United, the task, should you chose to accept, is to escape over the Pennines and bring back back three more points and deposit them in the Elland Road promotion vault.  Sounds simple doesn't it?  Go get em Leeds!
Can't wait.
MOT

Posted by Andrew Butterwick at 09:25