Mohican toilet brushes and Leeds look to chop down the Forest. Another week on Planet Leeds

A Leeds Utd v Nottingham Forest game will always stir dewy eyed memories in both sets of fans of heady European nights in the 70's where Leeds ruled supreme at the start of the decade giving way to Brian Clough's disciples conquering the continent in the later part of that iconic 10 years period. Though Saturday's game will be a passionate and enthralling game played out in front of a TV audience of millions and a packed Elland Road that's where the comparisons with the grainy memories of European games end.  This game is crucial to both sides in their battle to once again eat at the top table of English football.  Both sides have faltered in recent weeks with Leeds seemingly recovering after their savaging at Swansea only to limply surrender precious points to the Blunts and Ipswich.  Our friends from the City ground have fared no better as they have hit the promotion buffers with a jarring jolt failing to win any of their last 7 games as the inevitable end of seasons nerves begin to bite with a vengeance. Both teams will see this as an ideal opportunity to kick start their run in with the manager with probably the most worries that likeable rotound Scot, Billy "Job Done" Davies.  I do hope he's snarling and spitting the usual venom in his post match interview!

Most of the home fans attention may well focus on the midfield rather than the heart attack inducing back line as the two new loanees, Bannan and Livermore, compete for starting spots at the expense of Kilkenny, Bradders and Capt Fantastic, Howson. Bannan certainly showed enough classy touches at Bramall Lane to keep his place and I wouldn't be surprised to see Livermore alongside him.  Problem is with just 8 games left there is no time for new players to adjust to the pace of the game and get used to their colleagues in the frenetic chase for promotion and play off places.  One thing for sure any drop in form or signs of under performing players will get devoured by the ever demanding urinal philosophers over these last few games. 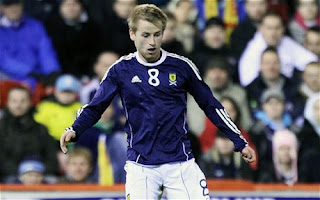 The international break didn't exactly sparkle with entertainment. England's clash with the Welsh in Cardiff sparked into life in the first 10 minutes but just as soon fizzled out like a cheap firework on a wet bonfire's night.  We didn't even have the pleasure of seeing the ever increasingly frustrated Bellamy's petulant antics get him a red card.  Ireland did manage a win before our Scottish cousin's discovered that you need a hell of a lot more than a couple of hearty choruses of "Flower of Scotland" to beat the impressive Brazilians.  Their new superstar Neymar looked tasty but why the hair cut?  He looked like a rather scruffy Mohican toilet brush!  Talking of silly hair cuts Mr Lescott again showed his distinct lack of international class as his woeful defending allowed Gyan to snatch an equaliser for the Ghanians against England reserves in mid week allowing the ITV crew to eulogise about the game as if we'd just watched an all time classic.  Why don't they get some reality into their commentaries?

Back to Planet Leeds then.  Prediction for Saturday? I have a strong feeling we will need 3 goals to win............. but with a refreshed Becchio, Snoddy and Mad Max prompted by Bannan et al in midfield that's definitely possible. Is it an 8 game season or 11?  Sit tight we're about to find out.  Those not at ER or in front of a telly can hear my thoughts and musings on the match on Yorkshire Radio as I join Thom and Eddie for a spot of "Fans panel" summarising during the game.  I'll try not to shout too loud when we get a last minute winner! Guess what?
Can't wait.
MOT

Posted by Andrew Butterwick at 21:43