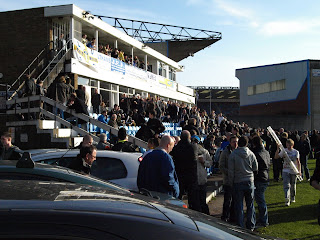 The sun was shining brightly as we passed the now not so dark satanic mills of Halifax and scaled the Wuthering Heights of Bronte country on our way to Burnley for our lunchtime clash with the Clarets.  The Happy Chocker and the Quiet One were as ever anticipating another unpredictable Leeds performance but had still plumped for a 2.1 victory for the Mighty Whites. We found refuge in the welcoming pavilion of Burnley Cricket Club for our pre match refreshments.  The Quiet One demolished an enormous helping of Yorkshire Pudding, sausage and beans with pictures of Burnley's favourite cricketing son, Jimmy Anderson, festooned on the walls of this very traditional cricket club adjacent to Turf Moor.  The news that O'Dea had replaced O'Brien in the team wasn't a surprise but Sam replacing Pugh was.  "Stoke have recalled him" an apparently informed Leeds fan revealed.  "If that's true it's not a good start to the day" I grumbled.

Once installed in our rickety wooden seats along with 4,000 other Leeds fanatics we observed the one minutes applause in remembrance of Jimmy Adamson, Burnley hero and one time not so successful Leeds manager.  Memories of Leeds' dramatic comeback in the corresponding fixture last year were fresh in the minds of the Leeds fans as the game got under way.  Burnley opened brightly with Rodriguez, Austin and Treacy all looking dangerous in the first ten minutes. Despite the early start the Leeds fans were in good voice  but were about to get a shock to the system.  Leeds lost the ball in midfield and with Lloyd Sam out of position on the left Burnley moved the ball swiftly to that flank where Trippier swung over a pin point cross for Rodriguez to bury into the net at the far post.  1.0 to the Clarets and Leeds were rocking.

Buoyed by their early success Burnley pushed forward to hammer home their advantage.  Thankfully McCarthy in the Leeds goal was in fine form as he expertly dealt with a dangerous one on one.  At the other end Clayton knocked two half chances over the bar but it was the Burnley midfield who were winning most of the ball and threatening the Leeds back four.  On the half hour Austin fell awkwardly as Kissy challenged him and left the field on a stretcher to be replaced by ex Leeds loanee Sam Vokes. "Well if he plays like he did when he was at Leeds he won't be any trouble" I mused. 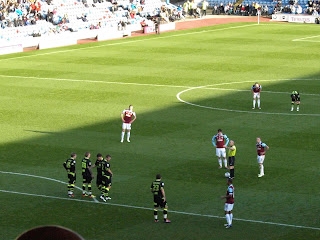 Leeds best chance of the half came when McCormack latched onto a through ball only to be denied by a stray goalie's hand outside the box but the hurried clearance went straight to Keogh who for the 2nd game running failed to return the ball into an empty net from 40 yards.  Leeds were still living dangerously though and once again McCarthy came to the rescue as he smothered a Rodriguez attempt and two long range shots.  I shuddered as I thought what would have happened if Rachubka was still between the sticks.  McCormack had the chance to bring the scores level just before half time as his free kick stung the home goalie's hands.  Leeds trouped off at half time to the frustrated applause of the Leeds fans.  Too few 50/50 balls won in midfield and too much slack marking in the defence for my liking.  Very much like last year I thought.  Wonder if they can turn it round in the 2nd half?  Clayton and Howson were being over run by the Clarets midfield.  Things did not look good.

The much needed lift in tempo by Leeds didn't happen as Burnley continued to have the better of the game.  Sam was causing some concern down the Burnley right flank but Snoddy was struggling to make an impact on the other flank as he was smothered by the close attention of the home defenders.  Leeds needed a change and a goal to get back in the game and they needed it quick as Burnley looked the most likely to get the all important next goal.  On 60 minutes Nunez and Becchio replaced Keogh and McCormack. Before either of them adjusted to the pace Burnley could have had a penalty as the rather poor ref missed what seemed a good shout as White bundled over Bartley.  Burnley would live to regret that as Leeds seemed inspired by Becchio and Nunez's appearance and their "never say die" spirit started to shine through.  Leeds weren't playing particularly well but Burnley started to creak under the pressure.  Sam jinked through and shot on goal.  The increasing pressure saw the ball reach Sam out wide on the left................he looked up and pinged a lovely ball to the back post where Snoddy slid in to equalise for Leeds. Get innnnnnnnnnnnnnnnnnnnnn! The away end erupted in delight as the Leeds hordes celebrated another late goal.  "We've still got time to get the winner" I optimistically suggested to the guy next to me.  "Fuck that I'll settle for a point now" he snapped back.............but Mr Uber-optimist had smelt blood and even though we hadn't played well I felt we could just sneak it? 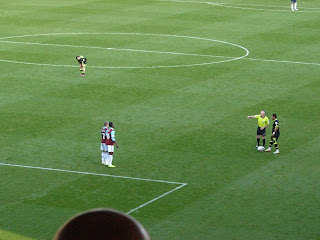 13 tense minutes remained.  Burnley's fragile confidence had taken a fatal blow with Snoddy's goal and there was just time to steal a winner.  Nunez was to the fore as his free kick rebounded of the wall for a corner.  The Leeds crowd were now trying to suck the ball into the goal.  The corner came across and went beyond the majority of players but Nunez recovered the ball wide..............he beat his man and then picked out Snoddy lurking with intent and unmarked at the back post.............the Scot controlled the ball and then struck the ball beyond the Burnley goalie into the net. 2.1 Leeeeeeeeeeeeeeeeeeeeeds and this time the roof came off the David Fishwick's stand that housed the wild celebrations of the Leeds fans.  "You should have gone Xmas shopping" boomed out from the away end in reference to last year's taunting song when we came back from 2 goals down to win.  Leeds survived the 3 minutes of added time for a famous victory.  Snoddy picked up his TV MOM award in front of the delighted Leeds fans most of whom had nominated the impressive McCarthy in the Leeds goal for the award.  He made half a dozen superb saves today to confirm the class keeper he is.

The smiles on the faces of the Leeds fans streaming away from Turf Moor said it all.  No we hadn't played that well but we had kept going right to the end and not for the first time this season we were rewarded for that persistence by late goals and 3 precious points.  Up to 5th in the table now! Wahaaaaay.

Even the slow traffic on our crawl home from Burnley didn't dampen our spirits.  News filtering through that Andy O'Brien has played his last game for Leeds after refusing to play didn't exactly spoil the mood.  After all he's 4th choice centre back for me so if he wants to take his bat home I doubt there will be any tears shed by any Leeds' fans.  In fact there will be plenty who wish he'd done it in the summer! 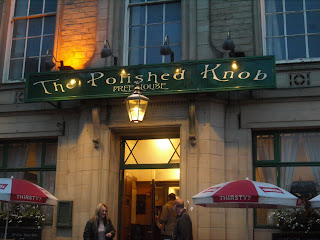 The final laugh of the day was as we passed through Todmorden and the Quiet One spotted the weirdest named restaurant/pub I've ever seen, "The Polished Knob".  "There's only one dish you can order there then.............Meat balls" I suggested.  The Quiet One was still chuckling as we passed the team bus on the outskirts of Leeds.  Another good away day and another 3 points for Leeds.  The Happy Chocker was nervous though.  Next up are Barnsley at the Theatre of Hope and as HC works with numerous "Barn acres" fans this is one we can not afford to lose.  So it looks like a week of Pre Match Tension for HC but for me I've only one thing to say.................
Can't wait!
MOT

Posted by Andrew Butterwick at 18:00