As expected the transfer window closed without any further additions to NW's small squad a fact of major concern to the majority of Leeds fans.  The contrast with today's opponents, Blackburn Rovers, is stark.  The Lancastrian's Indian owners have been overly generous with their transfer budget culminating with Jordan Rhodes arrival at Ewood Park for a staggering £8m. To pay that amount for an unproven goalscorer at this level is at best ambitious and realistically naively stupid. So there were a mixture of emotions amongst the mighty whites fans on Selby station waiting for the train to whisk them to ER.  Plenty of frustration and vitriol towards Capt Birdseye for not completing the longest takeover in Football history but also a fair amount of positiveness driven by an opening run of 4 wins out of 5 games so far.

As ever the Happy Chocker and the Quiet One were on board anticipating another exciting day at the Theatre of Hope. Is Diouf still a Leeds player? Who will protest the most Blackburn fans or Leeds? Will the Beast do some serious damage to the expensively assembled Blackburn stars?  Will Leeds now put Nunez, Pugh and Rachubka up for sale on E Bay?  All questions that were feverishly debated all the way to LS11.

The team sheet was revealed in the members bar.  Kenny in goal with Pelts, Lees, Pearce and Drury across the back.  Varney, Norris, Beast and Diouf in midfield with Ross Mac and Becchio up front.  No start for White or Byram.  A strong looking Leeds team but how would they fare against the unbeaten visiting team still littered with Premier league players..............plus Jordan Rhodes resplendent in his £8m price tag!   Paul Robinson received warm applause as he took up his position in front of the kop which he responded with a Leeds salute.  "You're Leeds and you know you are" tumbled down from the packed kop.

The game kicked off in bright sunshine with Blackburn immediately gaining the upper hand.  Pederson fired in a rasping shot that Kenny could only parry away as Blackburn's calm passing game unpicked the Leeds defence and midfield.  Murphy, Pederson and Etuhu were revelling in the space they were allowed in midfield and slowly turned the screw on Leeds.  Pederson rattled in another stinging shot that Paddy clawed away.  As the clock ticked past 15 minutes Kenny again came to Leeds' rescue.  Things were looking rather bleak for Leeds.  The ball was coming straight back whenever Leeds got the ball and it felt only a matter of time before Rovers would breach the Elland Road fortress. 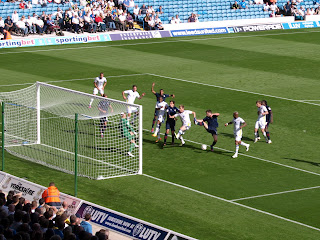 That time came on 18 minutes.  Pederson gathered the ball in midfield and slotted a simple ball into the space where Pelts should have been.........Pelts come out, come out where ever you are......... Olsson steamed into the wide open space with Diouf labouring behind him and headed into the box before drilling the ball past Kenny and into the net. 1.0 Blackburn and nobody could argue with that based on the balance of play.  Quiet descended on the previously boisterous Leeds crowd as the travelling fans celebrated.  Worse was to come though as a minute later Kenny was once again in action to turn away another Pederson shot as Leeds were in danger of been swamped by the quality of Blackburn's play.  Diouf was exposed on the right hand side of midfield and Rovers were targeting their ex player. On 26 minutes Blackburn doubled their lead via the same route as Pelts and Diouf again failed to stop an attack down the flank.  This time Gomes got the goal as he swept in a pull back from the bye line.  Bollox!  Leeds looked a beaten side and we hadn't played half an hour.

Neil Warnock's teams are nothing if not resilient and the fighting spirit that he has instilled in them started to gently rise to the surface.  Yes Blackburn's rapier like thrusts were still hurting Leeds but Warnock's weapon of choice, the battering ram, soon started to have some effect on the visitors defence. Balls thrown into the heart of the Rovers defence began to unsettle the Lancastrian's back line and from one of these mortar attacks Ross Mac was dragged to the ground on the penalty spot.  PENALTY the kop shouted in unison but the ref, Mr Swarbrick, turned the appeal down to add to an already long list of baffling decisions that had gone Blackburn's way.  This lifted the crowd and the team though and having spotted the slightest crack in the Rovers defence Leeds used the battering ram to widen the gap.  Another high ball in.......another scramble starting with Robbo dropping a ball under pressure from Becchio..........twice the ball is cleared off the line before Spit the Dog smashed the ball home. 1.2 Blackburn and ER was now rocking.  Suddenly Leeds were on top in a game that they looked dead and buried after 30 minutes despite Mr Scarbrick showing remarkable bias towards the away side.  Diouf was denied a 2nd by Robbo before the ref brought to an end a breathtaking 45 minutes. 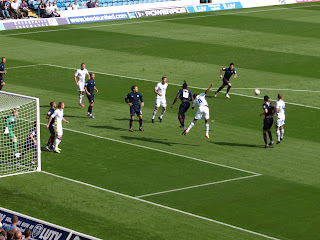 The gents debate with the Urinal philosophers was fairly unanimous.  "They're a better side" "Leeds need to keep battling" and "next goal is crucial" was the gist of it....oh and Jordan Rhodes is a waste of money!  Somehow Leeds had got to half time still in the game at 2.1 but I suspect a certain Mr Warnock was reading the riot act to his charges in the dressing room.  He had swapped Varney and Diouf to try and stem the flow down the Blackburn left but what was needed was tighter marking in midfield.  All was set for an intriguing 2nd half.  What we got was a classic blood and thunder half where class made way for some good old "up and at em" football.

Leeds had clearly decided that the only way they could defend against Blackburn was to attack and attack they did peppering Robbo's box with crosses and shots.  Varney tried his luck but was denied by a last minute block.  Diouf whipped a testing cross into the heart of the away defence as Blackburn tottered groggily something that didn't seem possible after the first twenty minutes.  Leeds torrent of pressure was about to pay dividends though.  On 57 minutes another long ball bounced to Drury who headed the ball towards Ross Mac on the edge of the box.......the Scot adjusted his run and hit a scissor kick volley beyond Robinson in the Rovers goal.  Get innnnnnnnnnnnn you beauty!!!!!!!!!!!!!!!!!!!!!!!!!.  Elland Road erupted. 2.2 and Blackburn were on the ropes.  The momentum was now with Leeds as they went for the kill.  Becchio's header was turned off the line as Diouf exacted suitable revenge on his former employers for the torrid time they had given him in the first half.  Unbelievable Jeff!

"We can still win this" I excitedly suggested as Leeds went forward again.  Diouf teased the full back and launched a ball into the box........Panic stations in the Rovers defence......the ball floats to Becchio who heads past Robinson. 3.2 Leeeeeeeeeeeeeeeeeeeeeeeeeeeeeeeds! and ER was now a sea of joyous disbelief.  Leeds continued to attack and within minutes I thought we were 4.2 up as Pearce headed home another cross.  I had to be disentangled from the pigeon netting in the rafters before I realised the Ref had blown for a foul.  Something told me that Mr Warnock would be having a word in the ref's shell like at the end of the game!  All we had to do now was hold on for the most unlikely of victories.

Jordan Rhodes was unsuccessfully trying to climb out of Tom Lees pocket as Blackburn tried to get back into the game whilst Leeds were now tackling and pressing every ball as if their lives depended on it.  The battering ram was slowly defeating the Rapier.  As the game entered the last ten minutes both teams looked for the killer goal but unfortunately it was the Rovers who struck the final blow.  A corner came into the Leeds box. Rochina got the ball with his back to goal and somehow back heeled it through Lees legs beyond Kenny.  Double Bollox! 3.3.  More drama was to follow though as the game went into added time Blackburn's now shell shocked defence made a complete hash of clearing the ball and it rebounded to Diouf on the penalty spot..............."hit the bastard" I'm shouting as I prematurely celebrated the winner only to see Diouf hesitate for a split second and then see his shot deflect wide of the goal.  The game ended 3.3 with the stadium high on adrenaline.  What a game! 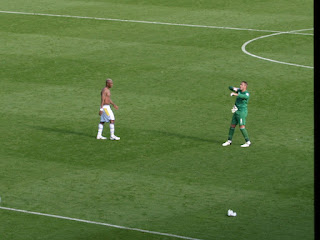 Robinson gave the kop another salute at the end as the crowd streamed away not knowing whether to be disappointed that we had lost a lead or pleased that we recovered from 2.0 down.  Diouf would have been my MOM but for missing the last chance so Mr Lees gets my vote for completely nulifying Rhodes on his debut.  Rhodes was last seen heading for Leeds General Infirmary for an operation to remove him from Tom's pocket!

Brilliant game, brilliant atmosphere, brilliant effort from Leeds.  Just think what they could do in this league with a couple more quality players?  Cardiff away next up for the mighty whites.

Posted by Andrew Butterwick at 20:06