Away days are always special even when expectations are as low and today they were as low as a world champion limbo dancer's lowest pole. Millwall  away at the best of times is always a testing game but playing them with a team that is struggling and low on ideas, luck and quality is not an enticing prospect. Still the Happy Chocker, Quiet One and Jusser boarded the train at York like Lemmings heading for the nearest cliff and another away day was under way.  What were the possible positives from today's clash? Well we debated long and hard and by the time we reached Grantham we finally came up with Ross Mac's return as the only possible chink of light at the end of a long, long tunnel.

After reaching London and negotiated the detour through Surrey Quays and the illuminating walk through the delightful suburbs  of Bermondsey we were in the Theatre of Hate otherwise known as the New Den.  Warnock's team sheet showed yet another midfield combination with Varney, Tonge, Green and Ryan starting across the middle. The Millwall fans gave us their usual warm welcome of a mix of Turkish songs and their hand salute which comprises of holding the forefinger and thumb in a circle and shaking the hand violently.  They've got some strange customs in this part of South London? 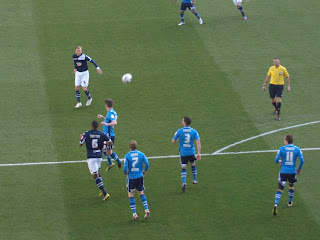 Leeds had the better of the opening quarter of an hour raising false hopes amongst the faithful travelling fans. Diouf was crudely scythed down on the edge of the box as he bore down on goal earning Beevers an early yellow card.  As is the case of late nothing came of the set piece though.  Ryan Hall showed some nice touches on his first start for the mighty whites and Drury was finding space down the left. Maybe this was gong to be more fruitful after all? Worryingly Millwall looked dangerous on the break though with the size of Wood up front complimenting Keogh's dangerous runs perfectly. Shittu at the centre of the Millwall defence is a big lad and made his presence felt on both Becchio and Diouf.

Millwall were creating better chances than Leeds usually when they swung the ball into the box. Kenny's legs saved from the head of the dangerous Wood at the back post whilst at the other end Becchio's shot was blocked after good work by Diouf.  But it was the home team who were starting to rattle the Leeds defence.  Taylor wasted a glorious chance from the edge of the box as he blazed over after good work down the Millwall right. Half time approached with Leeds still in the game but suffering from a lack of organisation in midfield as all four mid fielders seemed to be confused as to who was doing what or marking who.  Half time 0.0.

The general mood amongst the Leeds fans was mildly positive.  We were still in the game but hadn't created much.  Mmmm that's not for the first time this season I thought.

Millwall were out of the blocks first in the 2nd half as too many Leeds players seemed to have left their energy in the dressing room. Just to make things even more interesting Varney got himself sent off for a flying elbow on Adam Smith. Referee Mark Halsey reached straight for the red card as Smith fell to the turf. We don't like playing with eleven men do we? Debate raged around me as to whether he should have got a red but from the ref's reaction he had no doubt which is usually a good indication. 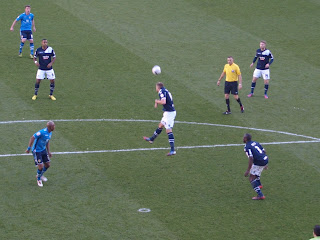 Millwall pushed on looking for the opening goal against ten man Leeds. The red card seemed to galvanise Leeds and they played some of their best football of the match for the next twenty minutes. Ross Mac came on for Hall who received a well deserved ovation from the visiting fans. His introduction lifted Leeds and his undoubted quality shone through despite his long lay off. But it was another sub who was going to make the telling impact on the game. N'Gussan came on for Millwall.  His rumbustious style rattled Leeds and it was from one of his early runs down the Leeds right that he created space for ex Leeds player Shane Lowry to swing in a teasing cross that Wood buried in the Leeds net from 8 yards. 1.0 Millwall and the home fans celebrated as if they'd just won the FA Cup with lots of their "salutes" aimed at the stunned away fans.

Leeds did apply sum pressure on the Millwall goal as they looked for an unlikely equaliser but there was a sad inevitability about the proceedings.  Pushing forward left them short at the back and Millwall really should have extended their lead but for some poor finishing and last gasp blocks.  At the other end Diouf was dragged down on the edge of the box to give Leeds one last chance. A chance Tonge blazed miles over the bar. Not many fans behind the goal were surprised and sort of summed up Leeds' current plight in a nutshell.. The game ended at 1.0 Diouf went to have a debate with a steward over some issue and the away fans reflected on a another disappointing performance. Millwall didn't look that good but if they had taken their chances the score would have been 2 or 3 nil.  Leeds managed only  4 shots all afternoon and 2 of them were the first 10 minutes.  Disappointing to concede late in the game but once again this season clean sheets for Leeds are about as common as they were in a Victorian whore house.

As we streamed away from the ground back to Surrey Quays the mood was black. The old bill were corralling us back to the station as we looked back on a performance that offered little hope for the forthcoming games against Palace, Leicester and Uddersfield.  Warnock was ranting about the sending off and other bad luck in his post match press conference but the harsh reality is that Leeds are now well and truly in the relegation dog fight and there is one reason for that..............we are not playing well enough to be anywhere else.

Missing my train home only darkened my mood but thanks to a generous ticket conductor on the following train it didn't cost me any more money.  That would have topped the day off in style.  These are worrying times for Leeds and I can only see them getting worse before they get better. As HC said on the way home "I better put my order in for a Where's Stevenage T Shirt before they all go".  Gallows humour is the order of the day I'm afraid.  High flying Crystal Palace are next up at Elland Road.  I dread to think what will happen.

MOT
Posted by Andrew Butterwick at 21:05