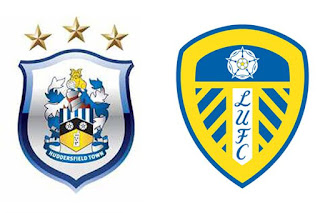 Nothing generates the passion, tension, fear and unbridled joy all in one heady mix of rollercoaster emotions than a good old blood and thunder local derby. Fans from both sides will sometimes deny it but beating your nearest neighbours brings with it all the excitement of winning a cup final but without the silverware. It somehow seemed appropriate then that our first clash of the season with our West Yorkshire cousins was on FA Cup weekend.


As ever on Planet Leeds this week had thrown up the usual mix of jaw dropping events, actions and comments that now infest our once great club on an almost daily basis. Cellino perfected the expected U turn on selling the club to the fans group and then accused the same group of making up fairytales! Peter Lorimer then comes out with a robust defence of the mad Italian and berates fans for forcing all previous owners out of the club, especially the paragon of honesty Mr Bates, whilst insisting that the vast majority of Leeds fans are fully behind Cellino. I think our all time leading goal scorer must have  been on a "Truth and Publicity" seminar in North Korea recently? Despite all the off the field turmoil the Happy Chocker, Quiet One and yours truly joined the travelling army of mighty whites fans eagerly heading west to Huddersfield for the lunchtime clash with the Puppy Dogs with just one thing occupying our minds............a win preferably like last year with the last kick of the game!

The miserable Huddersfield weather couldn't dampen the electric atmosphere inside the John Smith's stadium as the game got underway. Evans had kept the same starting eleven but dropped both Doukara, understandable, and Byram, puzzling, from the bench. Bamba and Adeyemi returned after suspension and ineligibility respectively but  had to make do with a place on the bench.

The opening exchanges were turgid and scrappy with Huddersfield having much the better of the possession but failing to really test Silvestri in the Leeds goal. Dempsey looked lively in midfield for the home side as they looked to impress their new manager, Wagner, who was sitting in the stands composing his notes on the mighty Terriers. Leeds struggled to get the ball from the home side but on 12 minutes they did conjure up an attack that led to Davidson giving away a corner. Before the corner could be taken Cooper lay motionless in the box as worried medics rushed to his aid. What had happened? Had he collapsed? After a lengthy delay he was carried off the pitch concussed apparently due to a collision with Wootton. I know we're not very good at set pieces but you'd think we could at least avoid taking a fellow Leeds player out before the corners even taken? Cooper's exit was Bamba's opportunity as he strode onto the pitch to join Bellusci at the back. Needless to say we didn't score from the corner.

Town continued to have the better of the possession and on the half hour Harry Bunn stung Silvestri's hands with the first meaningful shot of the game. This was by no means a classic game. God knows what the Sky viewers thought of it but even the ultra loyal Leeds fans were a tad cheesed off with the lack of any real action. Then Mr Wootton lifted the decibel levels in the stadium with a scything tackle on Bunn as the home fans screamed for a red card for Byram's replacement. The ref gave him a yellow much to the incredulity of the Huddersfield fans. Many fans around me pointed out that what the home fans didn't realise was that it would be to their advantage to keep him on the pitch. A bit harsh I thought.

The game became more scrappy the nearer we got to half time. Huddersfield had a couple of half chances as Leeds managed a couple of blocked shots at the other end but this game was heading for the vault for the most forgettable Leeds games.............then the game burst into life in spectacular fashion. First Bellusci tried to lob the goalie from fully 50 yards but only succeeded in waking up a snoozing Town fan way behind the goals. Better was to come though as 8 minutes of added time began with the home side appearing to switch off. First Wood battled well for a ball just over the half way and exchanged a sweet one two with Dallas who shot down the wing before pinging a delicious cross into the box where Antenucci skilfully finished with a flying shot. Get in! 1.0 Leeds and the away fans were in dreamland. What a fairytale finish to the half! But we weren't finished within a minute we were on the attack again as Antenucci beat the half hearted offside trap and rounded the home keeper..................his attempted pull back to Wood hit a defender's leg but the Leeds striker calmly side footed the ball home for an unbelievable 2.0 lead. Absolutely mint. The home fans were stunned as their team trooped off for their half time drink 2 goals adrift in a game they had dominated possession. HT 2.0 Leeds.

Ian Holloway was having some friendly banter with the Leeds fans from his vantage point of the outdoor Sky studio as I tried to figure out how we ended up two goals to the good in one of the poorest halves of football we'd played this season. Football is a funny old game. 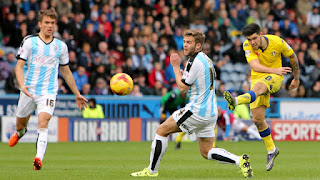 Huddersfield as you'd expect came out with all guns blazing in an attempt to get back into the game. Lolley, Dempsey, Bunn and Wallace all had shots flying Silvestri's way in the first ten minutes of the half. Then just as the nerves were beginning to jangle in the away end up stepped Alex Mowatt to banish any ideas that Town had of a comeback with another absolute screamer from 35 yards that left Murphy in the Town goal clawing at fresh air as the ball whistled into the net. It was carnage in the Leeds end as we celebrated yet another absolutely stunning strike from the 20 year old Leeds midfielder. 3.0 Leeds and the home fans were all sick as dogs. 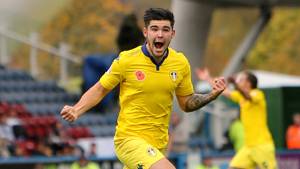 Huddersfield continued to have plenty of possession without any real threat on the Leeds goal. Bellusci was commanding at the back and Silvestri was solid in goal with neither player causing any flutters amongst the massed ranks of Leeds fans enjoying the 3.0 lead. A poor Huddersfield fan in a pair of less than flattering chino shorts was mercifully taunted by the delighted away contingent. Adeyemi replaced Wootton at full back before Botaka made a late appearance replacing Dallas on the wing. Botaka nearly brought the house down with his first touch of the ball as he jinked into the box and brought a finger tip save from Murphy.

Leeds saw the game through with ease although Town should have got one back late on. By the time the final whistle blew the Huddersfield fans had long gone leaving the joyous Leeds fans celebrating with the players and especially Steve Evans who seems to enjoy a good fist pump to the fans when we win. Mowatt's goal will stand out from this game but there were encouraging performances from Bellusci, Silvetsri and Wood. Dallas gets better with each game as does Berardi. Cook once again showed what an exciting young talent he is. All in all a very solid team performance............light years away from what we saw against Blackburn.

Back to back wins and clean sheets for Leeds something that seemed impossible just a couple of weeks ago. Next up are struggling Rotherham after the international break with a return to the Theatre of Hope for Neil Redfearn against Steve Evans former team. What price another screamer from Mowatt?


Posted by Andrew Butterwick at 17:52