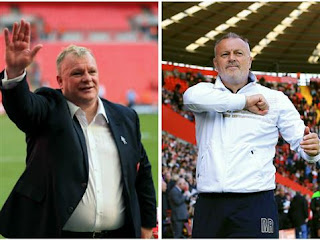 As ever after an international break I was chomping at the bit to get back to watching proper football and what more could you wish for than an intriguing Yorkshire derby laced with fascinating sub plots to ease you back into the routine...............and with a 3 pm kick off! Winter was in commando mode though as the bitter biting wind arrived under the camouflage of brilliant sunshine and a spectacular bright blue sky to pick off any piece of exposed skin amongst the 26,000 fans heading to Elland Road. To be blunt it was f****** freezing!

The Happy Chocker and Quiet One were joined in the car by two fans of today's enemy, the mighty Millers from Rotherham, which made for an interesting debate on the managerial qualities of Mr Evans and Redfearn respectively. By the time I had parked the car at the Theatre of Despair it felt like we had been fine tuning the script for a sequel to that iconic Eddie Murphy film, Trading Places. We headed for our different stands with all the usual pre match anticipation burning through our minds, Will Byram start? Will Mowatt score another screamer? Will the managers sit in the correct dug out? Has Cellino been sectioned yet?

Evans replaced his injured captain Bamba with Cooper in a starting eleven that still didn't include Byram. A poignant minutes silence for the victims of the Paris terrorist attacks preceded the start. Redfearn received a warm welcome as he headed for the unfamiliar away dug out and then we were underway. The game took some time to warm up but on 18 minutes Leeds had the ball in the net after good work by Wood presented Dallas the opportunity to side foot a parried save from Camp into the net. Luckily for the Millers Wood was adjudged to be offside. This did spark Leeds into life though and a spell of pressure on the hesitant Millers defence saw chances for Mowatt, twice, and Cook wasted. Camp did deny Mowatt with a decent save though before he attempted another long range stunner but this time the ball ended up nearer the corner flag than the goal.

Rotherham did threaten Silvestri's goal after a foul gave Smallwood a chance from 25 yards out. His free kick rattled the post with Silvestri stranded before the ref made him take it again due to Antenucci's encroachment. What would he have done if the ball had gone in the net? The half time whistle blew with the game at stalemate. 0.0. Not the most uplifting 45 minutes of football I've seen at Elland Road and soon the urinal philosophers were in agreement. "I could have been in Asda with our Lass rather than watching this rubbish" one disgruntled fan thought whilst another moaned "What an earth is Wootton doing on the pitch?" To be fair he wasn't having his best match in a Leeds shirt.

Leeds came out for the 2nd half fired up and within a minute Antenucci got on the end of a slick move but steered his shot wide followed quickly by two corners. This warmed the crowd up and all of a sudden there was a feeling that Leeds were moving up a gear to brush off Redfearn's team and secure a welcome 3 points. Then came a horrible crunching of the gears as Leeds engaged reverse. The ball was lost meekly in midfield and Rotherham attacked down the left flank where Smallwood looked up in amazement to see Newell all alone in the box. His cross was headed home with ease by the Rotherham front man to the delight of the travelling fans. Bellusci had apparently gone walkabout like an aged Australian with Alzheimer's disease. 1.0 Rotherham and suddenly it seemed a long, long way back for Leeds against the division's basement club.

Leeds started to huff and puff in their search for an equaliser. The long ball from the back became the weapon of choice for Steve Evan's men much to the delight his former team who gobbled up the majority of the aimless balls with glee. This had all the hallmarks of another deeply frustrating Leeds performance at Elland Road. Antenucci should have done better on 65 minutes when he snatched at a decent head down from Wood before Evans made a double substitution. Adeyemi on for Murphy and Botaka for Dallas. A glimmer of hope for the Leeds fans was soon extinguished as the illusive Botaka didn't get a touch of the ball for fully ten minutes.

Just when I was thinking things couldn't get any worse they did. Leon Best smashed his elbow into Berardi's face...............the mild mannered Berardi jumped to his feet and pushed the smirking Best to the ground before nearly sending the linesman with him as the official attempted to separate the pair. The inevitable two red cards eventually followed from the referee after an elongated discussion with his colleagues. Leeds now had just over 15 minutes to rescue the game from the ashes of a another woeful performance. They did give it a go as Erwin came on for the unusually quiet Cook. Botaka eventually began to get the ball and gave the Millers plenty of trouble. Wood missed a glorious chance as his header went straight at the goalie from 8 yards but it was too little and too late. Rotherham ran out winners at 1.0 as the frustrated Leeds fans streamed home from yet another home defeat.

Too many long hopeful balls and too few men in white prepared to get on the ball were the building blocks of this defeat. The midfield was bypassed time and again as we tried to get our forwards in around the back of the Rotherham defence.............which seemed a strange tactic for a team with little pace up front. Especially when the Rotherham centre backs looked most vulnerable when Leeds did get the ball on the floor and run at them. Very, very frustrating.

So Redfearn enjoyed his first win of his new assignment back at his spiritual home. Rotherham just about deserved their win because they took one of the few chances that came their way even though it was gift wrapped in a way that the long suffering home fans are all too familiar. It's still one step forward and two back for Leeds. Onwards to QPR next week to do battle with two more members of the burgeoning Ex Leeds managers club in Mr Warnock and Mr Blackwell. That should be interesting?

MOT.
Posted by Andrew Butterwick at 19:19